A discussion forum for those diagnosed with a MH/BH disorder to pour out the stresses and blessings of their daily lives, and help one another overcome the stigma of being labeled

You are not connected. Please login or register

» NEWS IN THE WORLD

» What do you think about Let Us Overcome?

» What Are Your Experiences 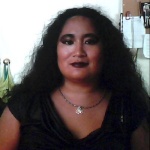 My name is Carmela Rheea, but usually go by Rheea. I only answer to Carmela formally (legal forms, medical visits, etc.). I am the Administrator of the Let Us Overcome community.

I was diagnosed with depression 2004, and subsequently diagnosed bipolar in 2006. I have 'suffered in the clutches of my symptoms' since I was a teenager. Undiagnosed and utterly unstable, I lived an out of control life, doing things that were unethical. My mind existed in an imaginary world that was merged with reality. I could not differentiate between the two.

I fell into the world of methamphetamines when I was 24, in 2003. I found that this drug 'slowed' me down, that I was super-focused. I went from feeling good being worse until 2006. I have been clean since August of 2011. Since November, I have been residing at a social rehabilitation board & care that also has a dual-diagnosis program.

I am thankfully in a safe place. Within the few months I have been here, I have grown tremendously. I have learned personal tools through Cognitive Behavioral Therapy groups and Dual-Diagnosis groups, and have been applying them. Also I have been attaining independence.

Now, I have laid this out as an example of an introduction. The specificity of this particular entry is rather deep. You do not have to reveal as much as I have revealed about myself. Feel free to write only what you are comfortable with.
Current date/time is Thu Aug 06, 2020 10:03 pm